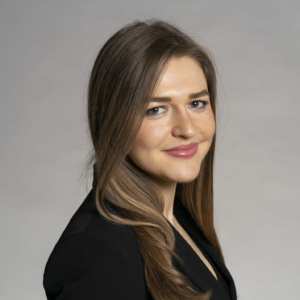 Lottie Pyper Called to the Bar 2017

Lottie joined South Square as a tenant in October 2018.

She has experience of all Chambers’ core areas of practice, including domestic and cross-border insolvency, restructuring, banking and finance, civil fraud, commercial litigation, insurance, company law, offshore and bankruptcy.

Lottie frequently appears as sole or junior counsel in applications made under the Insolvency Act 1986, the Companies Act 2006 and the Civil Procedure Rules. She particularly familiar with applications related to insolvency.

Over the last few years, Lottie has been involved many of the major insolvencies and restructurings, including Noble, Steinhoff, Nyrstar, Galapagos, Regis, Toys “R” Us, Cattles and Equitable. She is also junior counsel in Snoras v Antonov and Baranauskas, a fraud claim seeking to recover €492 million.

Lottie has considerable experience of complex schemes of arrangement. She was junior counsel in Noble Group Limited and NN2 Newco Limited; Politus B.V. and assisted with the solvent scheme and Part VII transfer proposed by The Equitable Life Assurance Society.

Between April 2019 and July 2019 Lottie completed a secondment at Freshfields Bruckhaus Deringer.

Lottie holds a First Class degree in English Literature from Oxford University and a Distinction on the Graduate Diploma in Law from City University. She was called to the Bar as a Bedingfield Scholar, Gray’s Inn’s most prestigious award.

Lottie has extensive experience of domestic and cross-border insolvency and restructuring.

Lottie is very familiar with applications related to winding-up petitions, including injunctions to restrain presentation and/or advertisement; withdrawal; appearing in the winding-up court; disputed debt hearings; rescission applications and moving companies from voluntary liquidation into compulsory liquidation.  She represents both creditors and debtors at all stages of the bankruptcy process.

Her current and recent instructions include:

As a pupil, Lottie assisted on a number of high profile cases, including:

Lottie is familiar with applications seeking to rectify the register at Companies House, and other applications under the Companies Act 2006. She advises on various company law matters, including directors’ duties, unfair prejudice, the payment of dividends and company meetings. She has particular experience of schemes of arrangement under Part 26 of the Companies Act, and has advised on the new procedure in Part 26A.

Examples of her work are as follows:

Lottie has a particular interest in banking and finance, having completed a three-month placement in J.P. Morgan’s investment banking division prior to joining South Square.

Lottie frequently advises banks and other FCA-regulated entities about their legal and regulatory obligations towards their customers. Current and recent instructions include:

Other examples of Lottie’s banking and finance work include:

Lottie is junior counsel for the claimant in AB bankas Snoras v Antonov and Baranauskas (with Robert Amey). It is alleged that the defendants dishonestly misappropriated €492 million from the claimant, a Lithuanian retail bank.

Lottie is familiar with insurance business transfers under Part VII of the Financial Services and Markets Act 2000 and the broader regulatory framework applicable to insurance companies.

Lottie has experience of commercial litigation, both within and outside the insolvency context.

Lottie has a developing offshore practice. Examples of her work include:

Publications +
Education and Qualifications +
Scholarships +
Scroll To Top
We use cookies on our website to give you the most relevant experience by remembering your preferences and repeat visits. By clicking “Accept All”, you consent to the use of ALL the cookies. However, you may visit "Cookie Settings" to provide a controlled consent.
Cookie SettingsAccept All
Manage consent