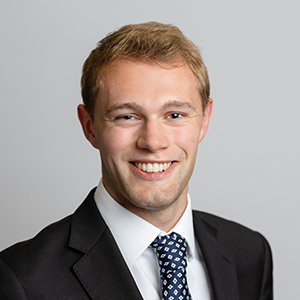 Paul Fradley Called to the Bar 2019

Paul joined South Square as a tenant in October 2019.

Paul’s practice covers all of Chambers’ areas of expertise, including corporate insolvency and restructuring, bankruptcy, banking and finance, offshore and fund litigation, commercial litigation and arbitration, company law, and trusts.

Paul has a developing offshore practice, having been called to the Bar of Eastern Caribbean Supreme Court, British Virgin Islands, and is currently instructed in relation to ongoing litigation in the BVI.

Paul has extensive experience of domestic and cross-border insolvency law. He regularly appears, both led and unled, and provides advice in insolvency matters. He is familiar with winding-up petitions, including injunctions to restrain presentation and/or advertisement; withdrawal; disputed debt hearings; bankruptcy annulment; and administration applications and extensions.

His current and research instructions include:

As a pupil, Paul assisted on a number of high-profile matters, including:

Paul has experience of commercial litigation, both within and outside the insolvency context, and often with an international element.

His current and recent instructions include:

As a pupil, Paul assisted on a number of high-profile matters, including:

Paul has a developing offshore practice. In 2022 Paul was called to the Bar of Eastern Caribbean Supreme Court, British Virgin Islands.

His current and recent instructions include:

As a pupil, Paul assisted on a number of offshore matters:

Paul has experience in various company law matters. He is familiar with applications seeking to rectify the register at Companies House, and other applications under the Companies Act 2006.

2018 – Tutor to undergraduates in the Law of Trusts at both St Anne’s and University Colleges, University of Oxford.

Collins and Fradley, ‘Policing the boundaries of articles 8 and 11 ECHR’ (2019) Industrial Law Journal 225.