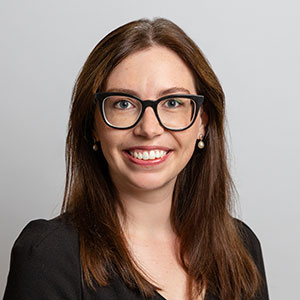 Roseanna Darcy Called to the Bar 2016

Roseanna has a broad practice across all of South Square’s areas of expertise, including insolvency and restructuring (both domestic and cross-border), commercial litigation, company law, and banking and financial services.

Roseanna regularly appears as sole counsel in the High Court and in the County Court. She has experience in making insolvency related applications, as well as applications under the Companies Act 2006 and the Civil Procedure Rules, both on an urgent and non-urgent basis.

She has also acted as junior counsel to many of the silks in Chambers. She successfully appeared in the Court of Appeal (led by the late Robin Dicker QC) in Etihad Airways PJSC v Prof. Dr. Lucas Flöther (on behalf of Air Berlin plc, in Administration) (a jurisdiction challenge concerning the applicability of the Brussels Recast Regulation to asymmetric jurisdiction clauses). She has also recently acted on behalf of the Official Receiver in Re Baglan Operations Ltd [2022] EWHC 647 (Ch) – a dispute concerning the power of a liquidator to only carry on the business of a company for as long as necessary for its beneficial winding up (led by Felicity Toube QC and Daniel Bayfield QC).

Roseanna also has experience with schemes of arrangements and restructuring plans and acted as junior counsel in Jain International Trading BV (led by Tom Smith QC and Felicity Toube QC).

In addition, Roseanna undertakes drafting and advisory work in all of Chambers’ core areas including on matters arising in other common law jurisdictions. Most recently she has advised on certain contractual claims arising in Jersey. She has also advised on multi-jurisdictional disputes more generally, recently advising on the recognition of a foreign law governed bankruptcy.

Roseanna is also often instructed on work without any insolvency element, and she previously supported the Independent Third Party to address complaints from small business customers of RBS’s Global Restructuring Group.

Between February 2019 and September 2019 Roseanna undertook a secondment in the litigation department at Shearman & Sterling. Here she gained invaluable experience working on a variety of commercial disputes, including an expert determination of a $200 million M&A closing account dispute, an arbitration of a multi-national construction dispute, competition law claims in the CAT, shareholder claims in a large-scale fraud, as well as a Part 8 claim involving issues of EU law and the nature of comfort letters.

Prior to joining Chambers, Roseanna obtained a First-Class Honours degree in History from King’s College London and a Masters’ degree in Medieval History from Oxford University. During her undergraduate, Roseanna also spent 6-months at Auckland University in New Zealand. Roseanna is a member of the Honourable Society of the Middle Temple and is a recipient of their most prestigious award, the Queen Mother Scholarship.

Roseanna also has experience advising office-holders on their duties and powers whilst in position, creditors on matters relating to their claims in the insolvency, as well as parties on void dispositions, wrongful trading, misfeasance, preferences and fraudulent trading.

Roseanna also has experience in drafting statements of case and witness statements for use in both court proceedings and mediation. She has advised on matters including breach of contract claims, construction of agreements, and prospects of success of commercial claims. Roseanna has also acted on security for costs and specific disclosure applications.

Roseanna has advised on various banking and finance issues including the construction of ISDA Master Agreements and other financial contracts, as well as debt securitisation.

Roseanna has experience acting in and advising on various company law applications including unfair prejudice petitions, restoration applications, applications to register company charges out of time and claims against directors.

Roseanna has experience in advising on matters relating to civil fraud, and has advised on a claim for unlawful means conspiracy and fraudulent trading.

Roseanna has advised on a variety of offshore matters, and has most recently advised on and drafted an Order of Justice for a claim compelling disclosure of certain documents pursuant to a contract governed by the laws of Jersey.

Roseanna has assisted Glen Davis QC on matters arising out of regulatory interventions by the Gibraltar Financial Services Commission.