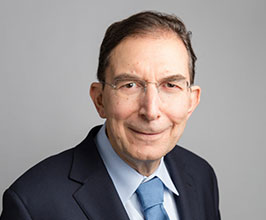 Gabriel Moss QC was a leading light of the bar and a titan of the insolvency and restructuring world.

Born in Hungary, he spent his early years there, until the Hungarian Uprising in 1956 saw his family take refuge in the UK. He remained able to converse in colloquial Hungarian for the rest of his life (as well as having a working legal knowledge of French).

After finishing school, Gabriel worked at a magistrate’s court before attending St Catherine’s College, Oxford University, from which he graduated as an Honorary Scholar with a BA in Jurisprudence with First Class Honours in 1971, followed by a BCL in 1972.  He was called to the bar in 1974, having been awarded the prestigious Eldon Scholarship on leaving Oxford University, as well as Hardwicke and Casell Scholarships from Lincoln’s Inn.  Reflecting the international reach of his practice he was later admitted to practice in Gibraltar and before the Eastern Caribbean Supreme Court generally, and in Bermuda, the Cayman Islands, Hong Kong and the Isle of Man for specific cases.  He took Silk in 1989, sat as a deputy judge in the High Court (Chancery Division) from 2001, and was elected as a Bencher of Lincoln’s Inn in 2003.

Gabriel’s practice was wide-ranging, encompassing banking law, company law, financial services, commercial chancery, off-shore law, and litigation, as well as, of course, insolvency and restructuring. In the latter field, in particular, he was pre-eminent, a fact all the more impressive in light of his confession in a 2016 podcast for OUP promoting the third edition of Moss, Fletcher and Isaacs, The EC Regulation on Insolvency Proceedings that he had come to specialise in insolvency rather by accident, and had been attracted to a career in law in part by “silly things” like the popular British TV series of the 1950s and 60s “Boyd QC”.

Gabriel’s expertise was recognised in the legal directories over decades.  Most recently, Legal 500 described him as the “doyen of insolvency law” and he appeared in the top “Star” category of QCs rated by Chambers & Partners.  Who’s Who Legal: Restructuring and Insolvency 2018 listed Gabriel as one of the 25 “thought leaders” in the world.  The Lawyer Monthly Legal Awards named Gabriel Restructuring and Insolvency Lawyer of the Year 2017 and Banking & Finance Barrister of the Year 2018.

Gabriel built his reputation tackling the most significant insolvency cases.  He was instructed not only for his understanding of all facets of insolvency law, which was second to none, but also for his creativity and imagination.  He was particularly valued by clients for his ability to come up with novel solutions to difficult problems, which led to his involvement in a great many cases before courts at the highest level, in doing so playing an important role in shaping the law as we know it.

Recently Gabriel had been acting as Leading Counsel to funds managed by Franklin Templeton, trying to prevent the International Bank of Azerbaijan (IBA) from obtaining a permanent moratorium in the English courts that would prevent the funds pursuing claims based on their English law governed debt. In December, he successfully persuaded the Court of Appeal that relief offered under the UNCITRAL Model Law in the Cross Border Insolvency Regulations should only extend for as long as the relevant foreign proceeding continued. The matter, which has seen the challenge to the century-old ‘rule in Gibbs’ that debt can only be compromised in the jurisdiction of the law it is governed by, is currently subject to an application for permission to the Supreme Court. He also retained his busy offshore practice, having appeared in the Grand Court of the Cayman Islands in Re Abraaj Holdings in late 2018, as well as appearing in the Privy Council in UBS AG New York (& Ors) v Kenneth Krys & Ors in February 2019 (on appeal from the Court of Appeal of the British Virgin Islands).

In a great many of these cases Gabriel led others at South Square. Indeed, almost all the juniors in Chambers had had the privilege of being led by him.  In this way, and many others, he played a vital role in the development of South Square as the preeminent set for insolvency.  He was unfailingly supportive of all those in Chambers, from the most junior to the most senior. For many of those he worked with, he made their careers. He was always generous with his time, and happy to discuss any point or legal problem, beckoning visitors to negotiate their way through hazardous mountains of paper to the chair in the corner of his room.

Gabriel was a true European, and he was and continued to be involved in many of the major cross-border insolvency cases across the EU. He was counsel to the Italian special administrator of Parmalat subsidiary Eurofood before the CJEU in the mid-2000s, which led to a controversial CJEU precedent in 2006 that an Irish court had jurisdiction to commence main insolvency proceedings for an Irish Eurofood entity, rather than an Italian court where its parent’s insolvency was pending.  Other notable EU insolvency cases of Gabriel’s include: Elektrim (UK/Poland); Enron Directo (UK/Spain); Daisytek (UK/France/Germany); Eurodis (UK/Netherlands); Stojevic (UK/Austria); Quinn (UK/Ireland) O’Donnell (UK/Ireland) and McNamara (UK/Ireland).  He also provided expert evidence for cases in jurisdictions including France, Germany, Australia, Denmark, Greece, the Netherlands, Italy, Iceland, Poland, Portugal, and Switzerland.

Gabriel’s expertise also led to a number of advisory appointments, which in the aforementioned podcast he described as a way to give back to an industry that had given him so much.  The Treasury, the FSA and the FSCS all sought Gabriel’s advice, as did financial regulators in Gibraltar, Guernsey, Hong Kong and Bermuda.  Between 2007 and 2013 he was a member of the Financial Markets Law Committee of the Bank of England and involved in the Working Groups on Property Interests in Investment Securities, on Building Society and Incorporated Friendly Society Set-Off, and on Financial Collateral.  He was also appointed as a specialist legal advisor to the Work and Pensions and Business Innovation and Skills House of Commons Select Committees relating to the BHS inquiry and the Carillion inquiry (regarding both of which he acted pro bono), as well as the FA Disciplinary Panel (for insolvency matters).

In 1998 Gabriel was invited to speak as one of four experts at a public hearing held by the Legal Affairs Committee of the European Parliament on the draft European Insolvency Convention, which led to the passing of the European Regulation on Insolvency Proceedings.  Between 2005 and 2007 he also sat on a review panel set up by the Insolvency Lawyers Association to consider enactment of the UNCITRAL Model Law in Great Britain and later its extension to banks and insurers.  In 2006 he was appointed as an International Advisor to the American Law Institute/International Insolvency Institute project on Transnational Insolvency: Principles of Co-Operation.  The European Commission appointed him to an expert group advising it on reforms to the European Insolvency Regulation between 2012 and 2015, which led to the recast version that came into force in 2017.

Gabriel also wrote extensively, with his books invariably leading the field, including the seminal text on the EC Insolvency Regulation – Moss, Fletcher and Isaacs on the EU Regulation on Insolvency Proceedings.

He also was editor, or co-editor, of Rowlatt on Principal and Surety; Lightman and Moss on the Law of Administrators and Receivers of Companies; Totty Moss and Segal on Insolvency; Moss and Wessels, EU Banking and Insurance Insolvency; Moss Kawaley Seife and Montgomery, Cross-Frontier Insolvency of Insurance Companies.  He was a contributor to Restitution and Banking Law; Insolvency of Banks; Comparative Law Yearbook of International Business; Company Charges: Spectrum and Beyond; Intermediated Securities: Legal Problems and Practical Issues; Waisman, The Law and Practice of Restructuring in the UK and US; Perspectives in International Insolvency Law and Vallens and Giorgini, Etude Comparative des Procedures D’Insolvabilite.  He sat on the editorial boards of International Insolvency Review, The Receivers Administrators and Liquidators Quarterly and Insolvency Intelligence, chairing the board of the latter since 1994.

Gabriel was a natural and generous-spirited teacher who was as much loved by his students as he was by those whom he taught more informally in Chambers. Over the years he was appointed as a part-time lecturer and tutor at St Edmund Hall, a lecturer in law at the University of Connecticut Law School and, most recently, a Visiting Fellow at St Catherine’s College, Oxford.

He also gave guest lectures around the world, including the Universities of Florence, Milan, Vienna, Leiden, Cologne and Leipzig, Brooklyn Law School at the University of Bologna, the Max Planck Institute, Luxembourg and NYU.  He also gave a number of lectures to French, Belgian and other EU insolvency judges. He was a regular face at international legal conferences, and developed many international friends and colleagues over the years as a result of his work.

In 2011 he was appointed Visiting Professor in Corporate Insolvency Law at Oxford University, an appointment which enabled him though his witty and generous teaching style, to share with students his unparalleled knowledge of substantive law, and to debate with them questions of policy, no doubt shaping the next generation of insolvency lawyers.  His support for young lawyers was also reflected in his support for scholarships, thesis examinations and advising on course structure.  In 2016 he was awarded the Distinguished Friend of Oxford Award, which recognises individuals who have acted as exceptional volunteers for the benefit of the university.

Gabriel was as prized for his friendship as for his intellect.  He was supremely approachable and humble, kind and thoughtful (as well as having a dry, and occasionally subversive sense of humour). Away from his intellectual pursuits, Gabriel’s interests included tennis, theatre, cinema and travel and, of course, his family, who meant the world to him. He also loved opera and concerts, and every Friday afternoon would play (amongst others) Mozart and Beethoven at thunderous volume in his room in Chambers.

He leaves a wonderful legacy, but we will miss him immensely.